The Mekong river is the tenth-largest river in the world. The Mekong River Basin drains a total land area of 795,000 km2 from the eastern watershed of the Tibetan Plateau to the Vietnamese Mekong Delta. The Mekong River flows approximately 4,909 km through three provinces of China, continuing into Myanmar, Lao PDR, Thailand, Cambodia and VietNam before emptying into the South China Sea.​​​​​​​ 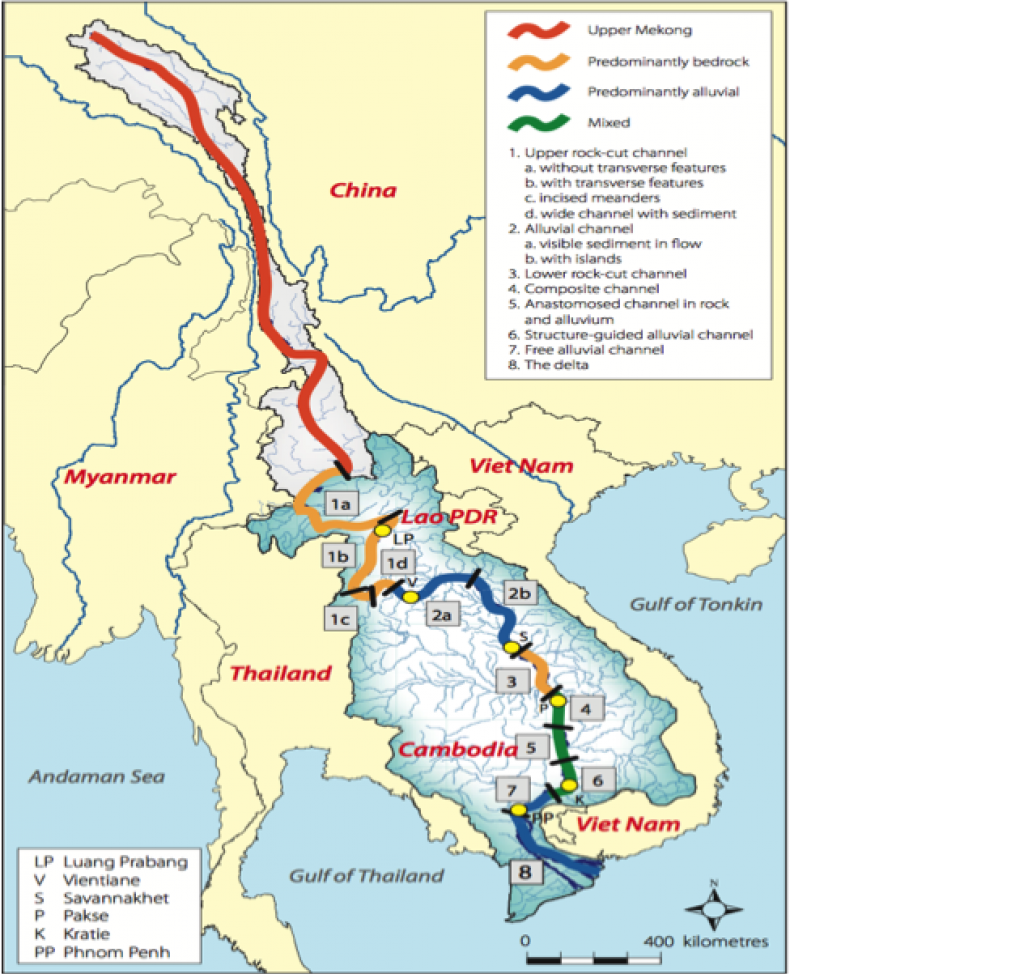 The Mekong Delta begins near Phnom Penh and ends up as a huge fertile flat plain in southern VietNam where the largest tributary, the Bassac River, branches away from the Mekong River. The Mekong and Bassac Rivers split into a number of smaller distributaries, forming an area known as the “Nine Dragons.”

The Vietnamese Mekong Delta region is roughly a 40,000 square kilometers triangle stretching from Gò Công in the east to Tân Châu and Hà Tiên in the northwest, down to Cà Mau at the southern tip of Vietnam, and including the islands of Phú Quốc and Côn Đảo.

The delta consists a variety of landscapes, including tidal flats, sand ridges and tidal back swamps in the coastal area, estuaries at river mouths, river flood plains, broad depressions, peat swamps, alluvial levees and terraces further inland. Inland, Melaleuca forest and grassland used to cover most of the acid sulphate soil area but now mainly remains in the protected areas in the U Minh peatland region in Kien Giang and Ca Mau, in Ha Tien grassland in Kien Giang province, and in the Plain of Reeds and the Long Xuyen Quadrangle.

The wetlands of the Vietnamese Mekong Delta are among the richest ecosystems in the Mekong basin. They are important breeding sites for many aquatic species migrating from upper reaches of the Mekong River. They can broadly be categorized into three groups: (i) saline wetlands with coastal mangrove and saltwater lagoons along the east coast and the west coast; (ii) inland wetlands dominated by melaleuca forest and seasonally inundated grassland habitats, and (iii) estuarine seasonally saltwater wetlands, distributed mainly at the mouths of the Mekong River.

The annual flood pulse plays a vital role in agriculture and fisheries. Large areas in the Plain of Reeds and the Long Xuyen Quadrangle are usually inundated in the flood season. The floods flush and dilute stagnant and polluted waters, recharge groundwater tables, maintain river morphology, sustain the productivity of freshwater fisheries, and floodwaters are retained for use in the dry season, particularly for irrigation. Flood-deposited sediments improve soil fertility across the floodplains. The flood season in the Mekong River Basin lasts from June to November and accounts for 80 to 90% of the total annual flow.

In the past decennia, the Vietnamese Mekong Delta has developed into a major food producing area, which plays a central role not only for national food security, but also in the wider regional ASEAN and global context through food-related export revenues and, hence, the foreign trade balance.

The inhabitants of the Mekong Delta region are predominantly ethnic Viet. The region, formerly part of the Khmer Empire, is also home to the largest population of Khmers outside of the modern borders of Cambodia. The Khmer minority population live primarily in the Trà Vinh, Sóc Trăng, and MuslimChăm in Tan Chau, An Giang provinces. There are also sizeable Hoa (ethnic Chinese) populations in the Kiên Giang, and Trà Vinh provinces. The region had a population of 17.33 million people in 2011. It has one of the slowest growing populations in country mainly due to out-migration. Population growth rates have been between 0.3% and 0.5% between 2008 and 2011, while they have been over 2% in the neighbouring southeastern region. Net migration has been negative in all of these years.

The Mekong Delta is one of the most fertile and productive delta areas in Southeast Asia and by far Vietnam's most productive region, accounting for 50% rice production, 65% of aquaculture production and 70% of fruits of the country. It accounts for 95% of rice export and 60% of fish export of Vietnam during the past decade.

From the American war, land-use in the Mekong Delta has been successfully dominated by a food-security policy: national self-sufficiency in terms of particularly rice and other food staples has been achieved. The food security policy is still deeply rooted in Vietnamese government policy, and the GDP share of agriculture in the Mekong Delta is 40% in comparison with 20% of the country's GDP for the national agricultural sector. Rice production in the Mekong Delta has almost doubled during the past two decades due to a rice intensification policy. In the 1990-2000 period many farmers shifted from growing one crop of long-growth-duration traditional rice per year to two or even three crops of high-yielding rice varieties per year. This "rice-first" policy turned Vietnam into one of the leading rice-exporting countries in the world.

Recognising the need for further improving rice farmers' incomes and the importance of aquaculture and fruit production for sustainable development of the agricultural sector, in 2000 the Vietnamese government introduced a policy on agricultural diversification.

Accordingly, driven by salinisation and enabled by the Đổi Mới policy, many farmers shifted their production from rice mono-culture to a more diversified rice-based farming system which includes aquaculture (catfish and shrimp farming), fruits and/or vegetables.

The Đổi Mới also induced a structural change, which was driven by a rapidly growing industrial sector since the mid-1990s. The most important industrial sector in the Mekong Delta is the food-related industry, especially the processing of food, the production of agricultural and aquaculture products and related industries in equipment and machinery. Besides that, textile industries and other low-technology manufacturing industries emerged. However in general, industrial development falls behind expectations formulated in development masterplans and the performance of the region in attracting FDI is evaluated as unsatisfactory by policymakers.