In the post-war era, the Mekong Delta’s agricultural sector has made enormous progress. Policies related to rice intensification in the 70s, followed by agricultural diversification introduced in mid 80s Doi Moi and industrialization in the 90s after WTO admission have played a central role in achieving food security and explosive growth in agricultural exports. As a result VietNam now ranks among the top global exporters in products as diverse as shrimp, fish, rice, and fruits. However, after the turn of the century, lacking alignment and inconsistencies between these parallel policies led to a situation with agricultural output coming from more and more inputs at increasing environmental cost. After the first 'early crisis' situations emerging, such as the 2011 flood and the 2014 and 2016 droughts, broad consensus appeared amongst VN and foreign stakelholders that Vietnamese agriculture has now arrived at a critical tipping point.

In a recent assessment of FDI in Vietnam, the World Bank noted that "diversifying across the value chain and particularly moving into higher value components of the value chain would generate higher benefits to the economy". In other words, there is potential for much more, when the Government of VietNam can decide to change course and pursue a well-coordinated and tailored agricultural transition. 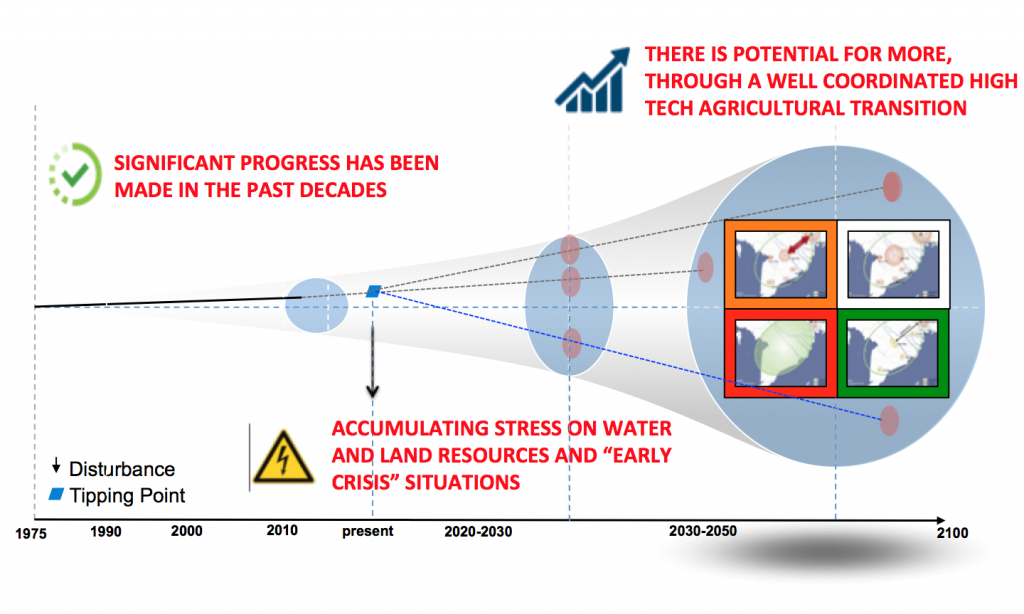 Although the Dual Node Industrialisation scenario in the Mekong Delta Plan corresponds well with the countrywide transformation objectives of accelerating growth of the industrial and services sector, it is highly unlikely that this development will be achieved in the near future. In view of environmental problems and manageable climate change impacts pursuing a strategy that is targeted at developing the core Agro-Business Industry based specialisation is considered to offer the best perspectives for the Mekong Delta:

The transition toward a high-value agrobusiness-industry economy requires a significant shift in focus from government: away from a role dominated by planning and monitoring efforts towards a role in actively pursuing an "enabling environment" by acting as incubator for innovation and sustainability, in close cooperation with the private sector. Embedment in a coordinating body at the interprovincial level is essential and can facilitate effective funnelling of ODA resources and FDI within the delta.

This vision for Agro-Business Industial development connects well with the future outlook for the agricultural sector as presented in the VietNam Development Report 2016. This report explains that over the coming 10-15 years the share of primary agriculture in gross domestic product (GDP) will decline yet agro-industry development could double this share, meaning that the agro-food complex will still account for a large share of total GDP and account for 35 to 40 percent of employment in the early 2030s. The report concludes that VietNam’s agricultural sector needs to generate “more from less”: it must generate more economic value - and farmer and consumer welfare - using less natural and human capital and less harmful intermediate inputs. Future growth should rely primarily on increased efficiency, innovation and value addition and requires important changes in economy-wide and sector-specific policies.